When I was 18 years old, I went on a mission to Africa for two years. I had a mission companion who I didn’t like very much because he had tons of money (among other reasons). My family didn’t have the money to send me on a mission, but someone from my church donated the funds so I could go. In order to buy some nice shirts and shoes for the mission, I sold my only possession, a 72 Chevrolet Nova that barely ran.

I spent a lot of time with this companion and discovered he had a lawn maintenance company. One day we were walking—we’d walk miles and miles in the scorching heat—and I just asked him, “So, are your mom and dad rich?” and he was like, “No.”

I had to drag it out of him, but eventually, he shared that he had a lawn maintenance company. I responded, “Oh, you push a lawnmower?” and he said, “Well, kind of. My brother runs it for me right now. I pay him $10 thousand a month to run this thing,” and that was back in the 1980s.

That’s when my companion planted a seed in my head. He said, “James, all I hear is crutches or excuses. Have you ever heard of a library?” I didn’t read very much, as I wasn’t good at reading, but he continued, “Go home and read some books you know, do yourself a favor. Take responsibility for your life.”

I took his advice to heart and came home and did drywall, which was the only thing I knew how to do until I had saved up $3,000. I used the money to buy a lawnmower and a truck and start a lawn maintenance company called Muro. It was hard work, but I grew it big enough to eventually serve large clients, such as golf courses and hotels in Las Vegas. I also did a lot of work for Howard Hughes and Del Webb. I built Muro until it was the largest landscape company in Nevada, then sold at the right time and did very well with that.

After my successful exit at Muro, I started a chain of scrapbooking stores with my wife. We built that into a large scrapbooking organization with an association and a buying group. We also owned a paper company and had several magazines in the scrapbooking industry. 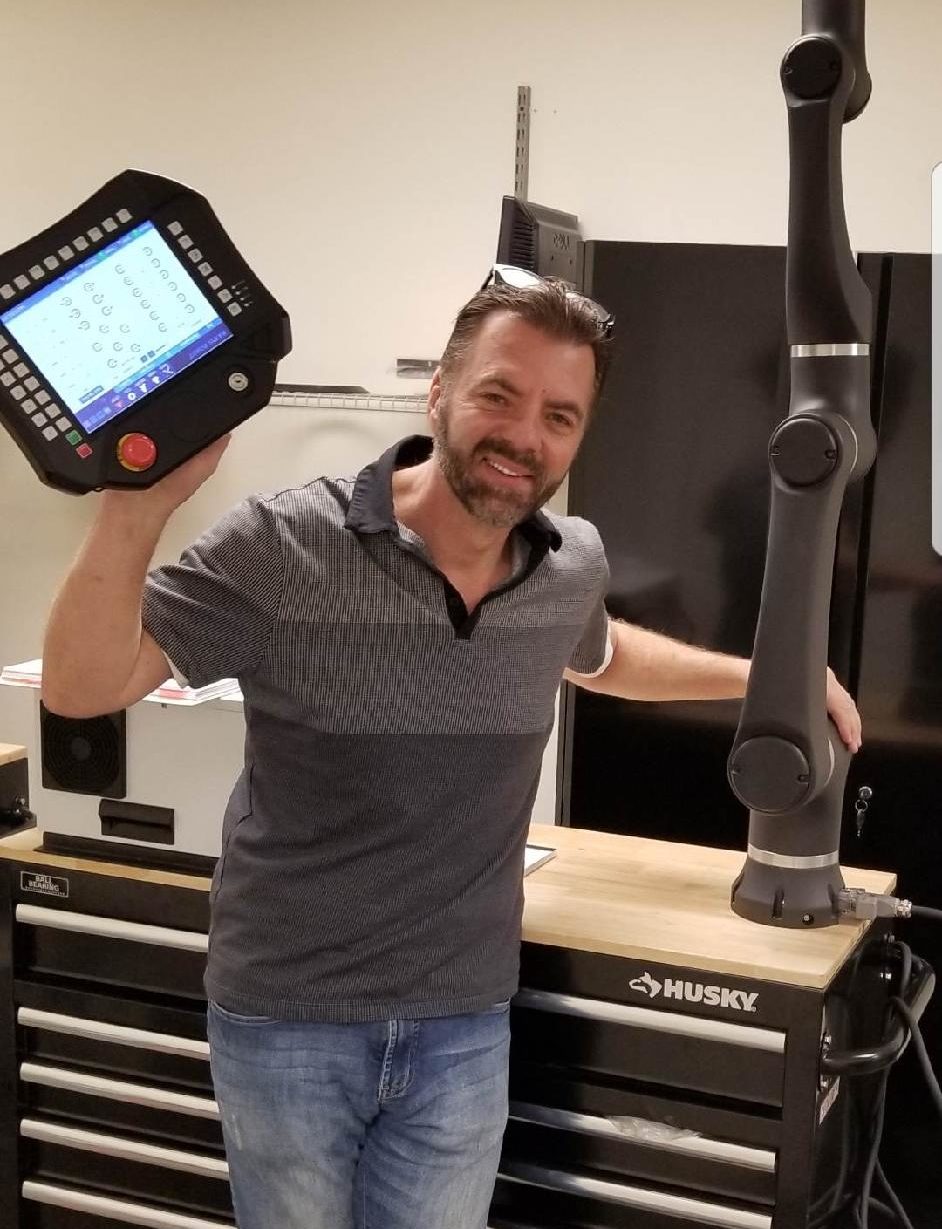 For a while, I wore an apron with pink gingham and talked about stickers and family history! The experience really meant something to me in the sense that people were using our product to document their lives and history and had something to pass on to their children and grandchildren.

Losing it all…then bouncing back

In 2009 and 2010, I lost every dime. I went from being the big man in town with a large home, houseboats, and airplanes to losing it all. It was a very dark time for me, and I emerged from that with a program we built to help children stay in school, which was a little dog tag that kids were given on stage if they had perfect attendance.

That program grew into a very large company that made a difference for schools. If a kid isn’t at first period, the school doesn’t get that $7 or $8 dollars that day. So we built a program because, in inner-city, socioeconomically disadvantaged areas, kids just don’t have the support of their parents as much to get them to school, and the school misses out on funds they desperately need.

At some point, the schools wanted the dog tags personalized so we needed a machine that would cut tags out of a laminate we created. I ordered this machine from China, which was a disaster when it arrived. It was ugly and rusted, and I was so mad. The machine ended up not working, and it wasn’t big enough for what we needed, so we decided to sell it. My son and I spent two weeks grinding and painting, then we put it on eBay—they called it a clicker press.

I had never heard of a clicker press in my life, but there was such an interest from the eBay ad that as soon as I had the money, I bought two more of those machines from China, which led me to start CJRTec, a clicker press distribution company. Clicker press machines can cut PVC cards, fabric, paper, cardboard, leather, and rubber.

Today, we are partners in a factory overseas and have a 70 percent market share. Sometimes I can’t believe that’s how CJR started—this machine that I got all mad about, put on eBay, got a ton of interest in, and I was like, “Maybe this is a product that I could sell.” I found a good supplier, started ordering more machines, and now I’ve got a half million dollars sitting in my warehouse, which drug me into factories that are manufacturing and making things here in America.

"Nobody is building a smaller home for the girl who works at your local 7-Eleven and can only afford a mortgage of $300 a month—now our mission is to see that become a reality."

At some point, I had a customer, 3M actually, that said, “We want a robot that will put the stuff on the machine before it cuts and pick up all the pieces, put the waste here, and put the good stuff over here.” I told 3M, “I don’t do robotics. I’ll send you a machine, but I don’t do robotics.” I told them to call the Japanese companies and buy a robot that will do what they want it to do, but they had bought a lot of products from me, and they said, “James, you’re overseas all the time. Can’t you just go figure this out?” At that time, I was overseas every other month throughout China, Japan and Korea.

I started looking into robotics and visited every robotic factory in China.  I made a point to study everything about automation and robotics, and that’s where my company, USA Botics came from.

I ended up finding a very bright mechatronics graduate over in China. I bought a Chinese robot and said, “I’ll be back in two months. Source every single part for this machine.” I returned two months later, and he had two working robots—the one we bought and copied and the other from components he could buy in the industry, and the margin was outstanding.

One day I was talking to someone who told me about this Russian guy on YouTube who built a 3D printer that prints concrete, and he suggested I look into it. I said, “Nah, not concrete.” But he kept urging me. I eventually gave in, and I am so glad that I did. I come from a construction background, so when I saw this thing that this Russian guy used to build a castle in the backyard for his daughter, I was like, “Oh my, this is going to be huge.”

I was doing very well then, so I wanted to reach out to the Russian and ask him if he needed an investor. I tried for two months to get a hold of him, and he never called me back, not an email, nothing. I finally just took two or three of my engineers and said, “You know what, build a small 3D printer, a 6X6, and let’s see if we could print concrete with it.”

Well, building a printer was nothing for us; it was super easy, but I had no idea what I was really getting myself into. It turned out the software needed a custom-batch plant that individually meters all of the ingredients. There’s a lot of chemistry involved, so I became very interested in all the ingredients that do different things with concrete. Eventually, we got a product we could print layer by layer without falling over and steel-bonding to the previous layer.

Now, five years and millions of dollars later, MudBots is the only company in the world that is privately owned and held. I don’t have loans. I don’t have government help. I don’t have grants from colleges. I don’t have partners, and we don’t even have payables. Every part we order for this facility is on a credit card, off eBay, Amazon, or straight from China.

I pay for the parts, the labor, and the machine. I pay for all the costs, but that employee has to donate his time to prove it, to make it work, to write the operation manual, and make the marketing videos for it. When it works, when it’s done, that employee gets a royalty payment.

Most of the time, those royalty payments are 30-50 percent of the profit of that part. Most of my employees and engineers make more money from their royalties than they do their salary—and that creates an environment where everybody is always looking for a way to make it better or faster because they also want their own little project. When I go downstairs and start handing out checks to people, they’re like, “What’s going on?” and the guy receiving the check says, “Yeah, every time we sell a machine, I get a royalty check.”

MudBots is a technology automation company that developed large-scale 3D printers (using cement) that can solve the affordable housing crisis worldwide, not just in America.

Before MudBots, I was retired. I came into the office two days a week, walked around, irritated people, asked them questions, and went home. MudBots, I felt, gave me purpose and excitement. I knew this was something I could take around the world to offer a real solution for affordable housing.

Our 3D printers are used by a lot of people as disruptive building technology because it replaces framing, drywall, stucco, and a lot of aspects. Because of this, every once in a while, I have people who give me pushback and say, “Well, you’re killing jobs, James.”

My response is always that I’m not killing jobs. Technology will bring more and more jobs to America. They said the same thing when Bill Gates and Steve Jobs built computers. My grandfather, clear back into the 1930s and 1940s, when the first tractors came out, the men used to go and attack the tractor, pop the tires, and pull the wires off it because this machine did the work of 50 men with shovels and they were afraid.

I’m going to err on the side of technology because I know there isn’t a major city in America that doesn’t have a deficit of 20-30 thousand homes, and people are living in the street. In Los Angeles, there are 250 thousand homeless, and 2-3 people die every night. We have a tool that, for the first time ever, can produce an affordable home in a third of the time for a third of the cost.

With our technology, developers can print any size home they want, providing a great solution for smaller, more affordable homes and tiny homes for the homeless. Because our homes are made in a fraction of the time for a fraction of the cost compared to traditional homes, more people who need housing can get it.

In every city, you’ve got 20 guys who can build 1200, 2500 square foot homes. Nobody is building a smaller home for the girl who works at your local 7-Eleven and can only afford a mortgage of $300 a month—now, our mission is to see that become a reality.

This article is written by James Lyman
Read the original post here.

3D-printing has revolutionized manufacturing, but changing an industry that still clings to sticks and nails might be harder.

From Boring to Amazing

Construction is one of the largest industries in the world economy – worth A$10 trillion globally (equivalent to 13% of GDP). But construction has suffered for decades from remarkably poor productivity compared to other sectors. While agriculture and manufacturing have increased productivity 10-15 times since the 1950s, construction remains stuck at the same level 80 years ago.

What is 3D Concrete Printing?